There aren’t too many that stand out, imnsho; but one is head and shoulders above the rest: 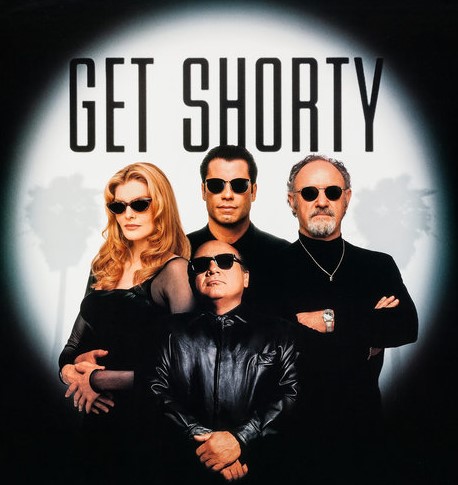 with music by John Lurie.

(I’ve always found Danny deVito extraordinary: not only has his highly successful career included many amusing ‘little guy’ roles, but in movies like “Other People’s Money”, he is the protagonist to whom not a single reference is made regarding his height. And it works !)

I was working for a Sydney group run by the Australian Vice-Chancellors’ Committee, and sent to attend a talk about Citrix networking given in a theatre not far from our building. In fact it was somewhat farther than I thought which resulted in my having to rush, but they were late starting; and I puffed in from the street, relieved to see all lights still on and hear ‘warm-up’ music still playing. I stopped at the back of the theatre, rivetted ..

Happily for me, I was standing next to the bloke who was operating the sound desk whence came this super music, so I hissed urgently at him “What is that faaaaabulous track ?” and he grinned and said simply “Get Shorty !” Turned out he’d been asked that question roughly 100 times by people more conscientious than I, so there much earlier ..

Later, Stringer and I bought the DVD of the movie and enjoyed it enormously. Still more did we enjoy the soundtrack; and I can’t resist giving you one more example:

(The imagery fronting that track is fascinating: every famous mafioso features, among all the stills shown.)

16 thoughts on “My music: the Soundtrack”