I know there are them wot can’t eat or even don’t like eggplant, but it’s now not only my favourite vegetable when made into eggplant parmigiana or eggplant schnitzels by my very dear friend M but also my f.v. when the base in meals as described above.

La melanzana is a wow of a vegetable ! 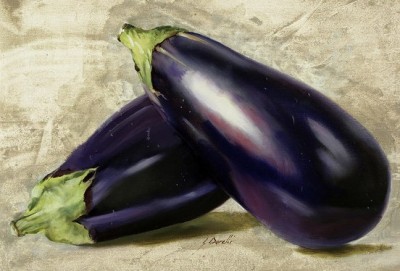 Of course there are lots more types of eggplant; but I never find them and so I just go on cooking and eating the ones in that painting (yes, that’s what it is: Italians are as fond of le melanzane as I am). The first recipe I’m posting actually means me to use one of those or two of the long thin ones, I think: but as I can’t find any of the latter I just use two of the former.   :)

And I’m also a fan of BEENZ ! – any kind including borlotti, kidney, cannellini, butter, black and chickpeas. I’d always considered that last-named pulse to by my favourite; but these recipes have shown me that I love ’em all !

I shall attempt to simply attach each recipe, rather than go through the whole boring thing of re-typing them. You may start praying now ..

Spicy Bean Stew. The simplest, but the vegies should be cut up pretty damn small.

BAKED EGGPLANT & BEAN STEW. Hang on a tick — I can’t remember if that’s the correct name for this one .. But it don’t matter much, eh ? And btw, it ain’t baked – it doesn’t need to be.

Creamy Eggplant & Bean Casserole. Tahini creates the ‘creaminess’: personally I would prefer it be described by some other adjective. Simple and quick(ish).

If you’re allowed eggplant and beans, these three dishes will make meals for whole families or for one grumpy old lady with some fridge space. In my frightfully humble opinion, each of these recipes is DELICIOUS, to put it mildly !!