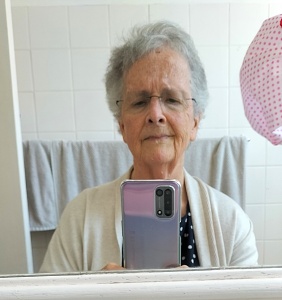 First reaction: erhmmmmmm .. this is nothing like the kind of cut I asked the hairdresser for.

But I’m going to have to live with it – at least for a while. (What the devil are those puffed-out bits on the sides ???)

And before you start shouting at me about the buzz-cut I was supposed to have, I can explain that !

The barber said my hair was too curly, and only a #2 (or #1 !) would prevent its lying about at strange and discrete angles. And as I had already come to the conclusion that I might have a #5 rather than a #4, just in case all the hair that fell out while it was so long had left nekkid bits behind, I was easily persuaded not to do it.

Turned out there’s a ladies’ hairdresser next to the barber, so I went in and asked them “If I say I’d like a haircut and possibly a colour job to dye my hair WHITE (not blonde !), how many years would it be before you could do it ?” As a client had forgotten her appointment, the boss lady could do it, like, then (having phoned said client to ascertain her whereabouts) but not the colour. She agreed that my hair is very curly (what on earth is going on ?!), and here is a terribly bad frame that’s meant to show you:

It’s only curly at the back ! – nowhere else. Because I whinged so much about how the curliness is entirely new and very unwelcome, she has done her best to de-curl me, with some success. Alas that the over-all impression is of a much taller Joyce (me auld mither), especially now that I almost have a shape.

How long have I been complaining how bad my photos are ? – roughly since I’ve been blogging, I believe .. I can’t even take selfies ! Still, it’s not of any importance, as taking selfies is not one of my hobbies. Yesyesyes, shut up ! – I agree I have been taking a plethora of ’em of late. But that’s it, I promise !!!